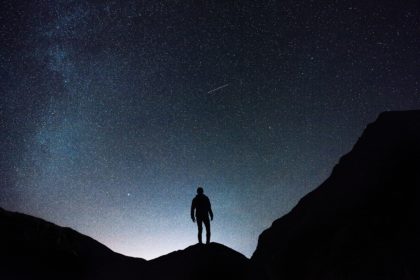 Have you ever been in the presence of something vast?

Have you ever felt yourself and your own personal concerns become small in the midst of this vastness?

Have you ever had an encounter with vastness that gave you goosebumps, caused you to freeze in place, or stare agape?

Have you ever had a feeling that you can’t fully take in an experience, that it’s just too much for you to fully handle, so beyond what you already know or believe?

Have you ever experienced time being altered, a sense that time has slowed down dramatically?

Have you ever felt a connectedness, a sense that everything is one?

If you have had any or all of these experiences, you have been opened to awe. According to Dacher Keltner, “awe is the feeling of being in the presence of something vast that transcends your understanding of the world.”

Traditionally experiences of awe have been understood in the context of philosophy and religion. That’s because religion has at its core the experience of awe. And as Rabbi Abraham Joshua Heschel says, “the higher goal of spiritual living is not to amass a wealth of information, but to face sacred moments.” (“Why Do We Feel Awe?” Dacher Keltner, https://greatergood.berkeley.edu/article/item/why_do_we_feel_awe; Heschel qtd. in Psychology Today, “Awe in Religious and Spiritual Experience”)

Religion has at its core experiences of sacred moments.There is the story of Moses and the Burning Bush, for example. Moses is a prophet in both Judaism and Christianity. And this is an iconic story of awe. Many scholars consider Moses a legendary figure, though his character may have been based on an historical figure. He is said to have lived in the late 14th century BCE, around 1393 BCE. According to the Hebrew book of Exodus, Moses was a Hebrew who was raised as the grandson of an Egyptian Pharaoh.

But Moses’s people, the Hebrews, are enslaved by the Egyptians. One day Moses witnesses a slave being beaten by an Egyptian. He intervenes. The Egyptian is accidentally killed. The Pharaoh becomes enraged, and Moses goes into hiding. While in hiding, Moses marries, and he becomes a shepherd tending his father-in-law’s flock of sheep. And that’s when the presence of something vast appears, when a sacred moment of awe occurs. The scripture says:

Moses was keeping the flock of his father-in-law Jethro, the priest of Midian; he led his flock beyond the wilderness, and came to Horeb, the mountain of God. There the angel of the Lord appeared to him in a flame of fire out of a bush; he looked, and the bush was blazing, yet it was not consumed.

Then Moses said, “I must turn aside and look at this great sight, and see why the bush is not burned up.”

When the Lord saw that he had turned aside to see, God called to him out of the bush, “Moses, Moses!” And Moses said, “Here I am.”

Then God said, “Come no closer! Remove the sandals from your feet, for the place on which you are standing is holy ground.”

The story of Buddha’s enlightenment is another religious experience of being opened to awe, of being opened to something vast. As with the story of Moses, the story of the Buddha appears to be part legend and part history. Siddhartha Gautama is a prince in the years 563 BCE to 483 BCE. He rejects his privileged life and sought a spiritual life. During this quest, he comes to sit beneath the Bodhi tree to meditate. While sitting beneath the tree, he is tempted by Mara, the demon of the inner ego. Mara attempts to derail Gautama’s quest for enlightenment. Violence, sensory pleasure, and mockery are used to distract him. But Gautama perseveres in his meditation. He becomes deeply absorbed, reflecting on life and its noble truths.

When he opens his eyes, he sees the morning star and attains enlightenment. He is enlightened to the true nature of existence. He exclaims upon seeing the star, “I, together with all beings, am simultaneously enlightened.” After his awakening, Gautama becomes the Buddha. He formulates Buddhism’s Four Noble Truths and Eightfold Path. He becomes a teacher, a guru, a prophet. (www.learnreligions.com/the-enlightenment-of-the-buddha-449789)

In Islam, Muhammad’s religious experience of vastness produces the Islamic holy book, the Qu’ran. Muhammad was born in Mecca in Saudi Arabia in 570 CE. He was a spiritual man who frequently meditated on Mount Hira. One night he is meditating in a cave and is visited by an angel. When the angel mentions the name of Allah, Muhammad begins to recite words. He soon begins to preach what had been revealed to him. These recitations are remembered by others and recorded. They form the text of the Qu’ran. For Muslims, these recitations are considered the words of God. And Muhammad is considered a prophet. (www.bbc.co.uk/religion/religions/islam/history/muhammad_1.shtml)

Each of these individuals has a spiritual experience of awe. They encounter something vast that is beyond their full comprehension. Their experiences draw them beyond the self, connecting them more deeply and propelling them forward as prophets of their faith. Each becomes a wisdom bearer who has had a direct experience of mystery, wonder, humility, awe, surrender, and reverence. They each become inspired to greater consciousness and kinship and commitment to all.

It was the 19th century psychologist William James who was among the first to make this point. James said awe is a universal experience. He arrived at this conclusion while pursuing awe himself. He had read the journals of George Fox, who founded the Quakers. James was in search of what Fox had described as spontaneous “openings” in nature. So James did what a lot of us do. He headed to the outdoors. He went to the Adirondacks. There, while hiking, he had epiphanies. This led to his belief that anyone can experience awe. (www.psychologytoday.com/us/blog/the-athletes-way/201505/the-power-awe-sense-wonder-promotes-loving-kindness; www.npr.org/sections/13.7/2014/09/16/348949146/is-atheist-awe-a-religious-experience, “Is Atheist Awe a Religious Experience? Adam Frank)

And then sometime around the 1960s, the experience of awe was further broadened. Awe came to be described not only in religious terms but also in secular ones. Thanks to the psychologist Abraham Maslow. He coined the term “peak experiences.” Most, if not all, of you are familiar with that phrase. Maslow described peak experiences as . . .

especially joyous and exciting moments in life, involving sudden feelings of intense happiness and well-being, wonder and awe, and possibly also involving an awareness of transcendental unity or knowledge of higher truth (as though perceiving the world from an altered, and often vastly profound and awe-inspiring perspective).

Maslow reframed what were previously considered supernatural, religious, or mystical moments as secular and mainstream. I still call them religious and mystical. But the thing is, it doesn’t matter whether you call these experiences sacred moments, religious, spiritual, awe, the sublime, or peak experiences. What does matter is that we have those experiences. What matters is that each of us can reach beyond ourselves to a vastness, a mystery.

This doesn’t require that we witness a burning bush that is not consumed by the fire or that we are visited by angels or demons. We don’t need to be gurus or prophets. Wonder and awe are everywhere. Opening to awe is possible for all of us regardless of our circumstances. (https://curiosity.com/topics/test-your-capacity-for-wonder-with-the-awe-experience-scale-curiosity/; Religions, Values, and Peak-Experiences, Abraham Maslow, 1964)

Awe can be experienced upon hearing the laughter of a child or observing people committing acts of kindness or virtue. It can happen through an encounter of mystery in nature or art. It can arise in the presence of individuals of extraordinary skill and talent.

I have been struck by awe at vigils at the Berks Detention Center. I had a peak experience listening to the Imam offer the call to prayer in Arabic at the Interfaith Thanksgiving service. I had a sacred moment while surrounded by a crowd of people at an anti-war protest in Washington, DC, and while chanting in Sanskrit at a program led by Jai Uttal. I have been awestruck when falling in love, snuggling my cat, singing to my mother when she was dying, and watching the snow fall. And I have had the religious experience of awe here too. I have felt goosebumps and noticed the energy of those beloveds gathered in this sanctuary shift to a stillness of the heart.

Today, from our own church sanctuary, we will consider what “sanctuary” means in our lives.  We all need places of refuge and protection; maybe now more than ever considering the continuous challenges we are being confronted with. What places, people, or practices feel like a … read more.