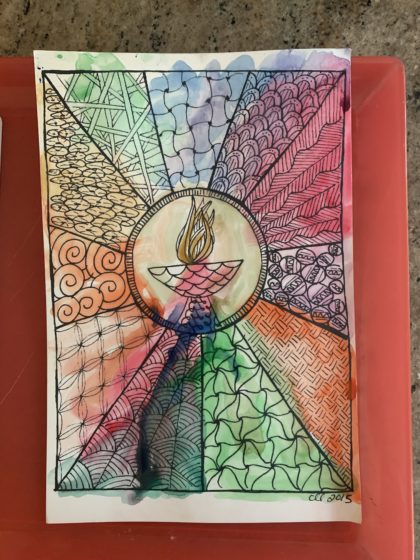 In May Kent, Ms Erin and I have been sending out postcards to the children and youth at UUBerks. On the picture side they had a coloring sheet. It was a white background and black lines. It was full of possibility. The image for this post is T. Hauk’s creation he filled in with watercolor.

This month we continue to strengthen our connections in new and creative ways. I’m inviting you to enter into a fun and simple spiritual practice that UU religious educator Kimberly Sweeny shared with me. In 2015 Kim started writing letters! MAGICAL letters. The Soulful Home packet explains:

“She was feeling blue at the end of a long and difficult winter where she lived, in New England. (And it gets COLD in New England.) She probably
missed playing outside with friends. She probably missed being able to go to friends’ houses to hang out. And she probably missed seeing friends’ beloved faces, and getting and giving hugs, high-fives, or waves hello with twinkly-eyed smiles. Maybe this is how you feel this month, after a long and difficult winter, and then spring, of living in the pandemic.
Kimberly knew she wasn’t the only one who might need some connection and kindness in hard times. So, she started sending her people letters, real letters, sent in the mail–and she made them wonderful–magical, even! She surprised people with clever, colorful, unexpected missives until the hard times became better.
Our neighborhoods may still not be places where it’s safe and wise to wander about and make contact with others. So again this month, we’re imagining a neighborhood of the whole country, continent, or even world!! And, instead of us looking for treasures, we’re going to scatter treasures, through our letters.
In letters to friends and family members, challenge yourself to include at least three of the following:

The end of the calendar year brings not only the multi-holiday season, but also the tax year’s end.  Charitable giving, as well as ethical shopping for all of those gifts for our beloveds, are on many people’s minds.  How do we practice our values when … read more.