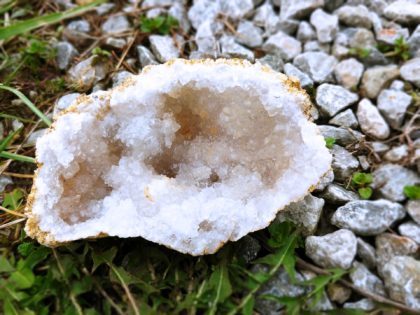 “Three things cannot be long hidden: the sun, the moon, and the truth.” —attributed to the Buddha

I call the tall bush on my back patio “Burning Bush” because in autumn its leaves are a fiery red. All winter long I overlooked three uninhabited nests inside of it. For months and months I could have perceived—but didn’t—what was in plain sight.

I was delighted to finally see them today, but not surprised. In the summer, I enjoy watching birds fly into and out of the leafy-branchy mass, catching glimpses of them hopping from ground to woody perch and back again.

I’m curious—and a bit embarrassed—that I hadn’t noticed the nests until now, springtime, when the branches are about to burst forth with green.

I called my partner over to point out the carefully crafted twigs, each a purposeful home, one with a bright green strip of discarded plastic cording as decoration. He, too, is delighted. He, too, had not noticed them.

What else is there in this world that my hustling and bustling have barred me from sensing and seeing? What else has my oblivion— self-induced or socially-constructed—hindered me from perceiving?

My guess is that it is not only delights, such as these nests but violence, too, that’s within perception’s range, if only I gave it my true attention. Acts of exclusion, discrimination, and the impacts of systemic oppression are all there, right before me. I don’t always perceive them—I have been taught to not see them—but they are there, nevertheless.

What else have I missed as I move through this world? How might I wipe the dust clouding my vision and be available to reality as it is? (https://www.uua.org/braverwiser/inviting-our-true-attention)

One evening the great Muslim Sufi master Nasruddin was searching frantically under a street lamp. He had lost something and wasn’t having much success finding it. A man walking along noticed him searching and inquired: “What are you looking for?”

Nadruddin replied that he had lost his house key. The man joined in the search. Together they diligently looked for the key.

After some considerable and fruitless combing of the area, the man finally asked: “Are you sure you lost the key around here?” And Nasruddin replied: “Oh, no, I didn’t lose it around here. I lost it over there by my house.” The man was puzzled. He asked, “Then why are you looking for it over here?” And Nasruddin said: “Because the light is so much better over here.” (multiple sources)

This morning this story makes me wonder about what we are searching for and where we are searching for it. In particular, I have been thinking a lot about where we find good. I notice that it’s typical to look in the usual places for it, in the familiar places where we’ve always found it before, in the places where we expect to find it, on the surface of things, or just to look where the light is best.

In her song “Geodes,” singer songwriter Carrie Newcomer suggests looking in common things. She sings, “I have found when I tried or looked deeper inside, what appears unadorned might be wondrously formed . . . . there’s hidden good in common things.”

The challenge, she says, is to look deeper into what is unadorned, and also to be open to the possibility of finding good hidden in unusual places. Rev. Karen Johnston comes to a similar understanding after discovering birds nests in a tall bush that she had not noticed for months. She asks, “What else is there in this world that my hustling and bustling have barred me from sensing and seeing? … How might I wipe the dust clouding my vision?”

How can we wipe the dust that clouds our ability to notice? When I was a child I loved Highlights for Children magazine. The magazine began in 1946, and I’m glad to know it’s still going. I understand there’s an app now too. Highlights helped me notice what wasn’t obvious.

And on an important side note, speaking of hidden good, in June on Twitter, Highlights for Children released a denunciation of the practice of family separation at the country’s southern border. Their CEO Kent Johnson’s message was that based on “their core belief … that children are the world’s most important people,” . . . “we denounce the practice of separating immigrant children from their families and urge our government to cease this activity, which is unconscionable and causes irreparable damage to their young lives.” (www.usatoday.com/story/life/allthemoms/2019/06/26/highlights-magazine-slams-treatment-migrant-families/1572542001/)

I love Highlights even more having read that. What I loved as a child, and I still do, are the hidden object puzzles. Searching for hidden objects such as pine cones, trowels, a pencil, ice pop, or apple is like going on an adventure. These objects would be hidden in all sorts of ways, blended into other objects, set inside pictures in picture frames. Sometimes they would be sideways or upside down or scaled to an unusual size. But there they were in plain sight and often so hard to spot.

For children, these kinds of puzzles are not only fun but they also promote attention to detail, visual perception, and curiosity—the same skills needed to find the hidden good in common things. These are skills adults need too.

Because the world can be a pretty complicated place. The hustle and bustle and the news cycle and social media—as well as frustration about the direction our country is taking on many important social issues–can lead us to spend our time tuning in to bad news. Or simply living in a state of distraction. And there’s plenty of distraction and plenty of bad news. Every single day.

For whatever reason, we tend to tune into bad news more eagerly than we do good news. The media is partly to blame, because murders, fires, and nasty weather sell advertising. But something deeper is at work. It’s an instinctive bias toward watchfulness for danger. This behavior makes perfect sense as the consequences of ignoring bad news are higher. On the other hand, it distorts our collective perception of reality, which creates all sorts of consequences.

That tendency to tune into bad news adds global struggles onto our own everyday struggles. People are struggling to manage work and family responsibilities, care for elderly or ill family members, deal with economic and employment stresses, and overcome addictions. The grind of daily life can wear people down and mask the mystery and wonder that can uplift and restore the spirit. All of this can get in the way of our being able to notice what’s good.

I’m not suggesting we minimize our problems or the world’s. But we need to cultivate the deep roots of hope and resilience and joy to help us navigate those struggles and to have lives of meaning and purpose. So we don’t miss what’s in plain sight. That is a lifelong endeavor. It comes from doing the spiritual work of tending to ourselves so that we can see the hidden good, so that even in the most difficult times, we can still affirm that there is hope, love, kindness, compassion all around us.

Sensing and seeing the good means tuning in to what has meaning, reawakening to what fuels passion, relationship, and well-being. That can be truth, justice, insight, happiness, peace, beauty, love—or some combination of these. Finding good is to encounter the depth dimension and wholeness of life. It is the search for what makes life worth living. It is the good stuff of everyday life, those common miracles that are there all along, all around.

‘Round here we throw geodes in our gardens

Unpretentious browns and grays the stain of Indiana clay,

And inside there shines a crystal bright as promise

All these things that we call familiar,

Are just miracles clothed in the commonplace.

Our Unitarian Universalist principles invite us into a free and responsible search. We have many resources for doing that searching, including the guidance of reason and science. Our resources also include direct experience of mystery and wonder which renews the spirit and opens us to the creative forces of life. That helps open us to those miracles, to the hidden good.

Gordon Hempton is a sound tracker. He knows how to see the good, or rather hear it. He records nature sounds. In a PBS documentary called “The Vanishing Dawn Chorus” he shared his experiences of traveling 70,000 miles globally over the course of four months. His work of recording nature sounds led him to have what the Eskimos call “the ear of the animal.”

Gregg Levoy describes Hempton’s ability in his book Callings: Finding and Following an Authentic Life. He says that Hempton

can listen to a recording of wind in the pines and tell you the length of the pine needles. He can hear the sound of water running underground. He will tell you that quiet places, including those on the inside of us, are ‘the think tanks of the soul.’ And he will tell you that having the ear of the animal has more than once saved not only his soul but his skin.

Remember to start small. Just observe at first, don’t analyze. Use curiosity, not interrogation. Save that for later. Just as we get better mileage when we separate the creative and critical functions in our attempts to write or paint or invent, so, too, we make self-awareness more palatable by holding off the impulse to be critical so that we focus initially on the desire simply to see. Observation in itself will be considered an intrusion by those undiscovered parts of us hiding along the banks of our consciousness.

This week in my own effort to find some hidden good, I searched around for some examples of positive news. Here in brief are seven hidden gems I dug up:

1.     A grassroots “save the bees” petition has forced greener farming measures in Bavaria. The petition calls for more grassland to be turned into meadow. And a third of farms must be organic within 10 years.

3.     In June, Botswana’s high court decriminalized homosexuality. That was a landmark victory for Africa’s LGBT activists.

4.     In February, a giant tortoise believed extinct for 100 years was spotted in the Galápagos. The female tortoise is believed to be about 100 years old.

5.     Approximately 90 million toilets have been built in India since 2014. If you know anything about India’s sanitation struggles you will recognize that as a monumental shift. 93 per cent of households in India now have access to toilets.

6.     Costa Rica has doubled its forest cover in the past 30 years. This reforestation follows decades of deforestation. What made the difference? Costa Rica began to realize the potential of its rich ecosystems. And policy-makers have restricted the number of logging permits and created a national forestry commission.

7.     In May the World Health Organization declared Algeria and Argentina officially malaria-free. 38 countries and territories are now free of the disease. (www.positive.news/society/what-went-right-january-june-2019/)

I encourage us all, when we begin to lose track of the good, to take some time to recover our sense of wonder and curiosity. Take time to dig for the hidden good. Practice having the ear of the animal. What we find may save our spirits and our skins.

Today, from our own church sanctuary, we will consider what “sanctuary” means in our lives.  We all need places of refuge and protection; maybe now more than ever considering the continuous challenges we are being confronted with. What places, people, or practices feel like a … read more.